If you’re are a regular reader of this blog then you will already know how much we enjoy getting out and about to try new places and new things. My boys don’t like sitting still for very long and are always asking what plans we have. We’ve done our fair share of farm visits over the years but one place we’d never visited before was Godstone Farm.

I’d already heard so many good things about this place from friends and family but for some reason or another, we never quite made it there. We were invited to visit back in June and we were all very excited about spending the day there.

Our visit to Godstone Farm

Godstone Farm is situated in a picturesque part of Surrey known as The Surrey Hills and around a 40-minute drive from Kingston. Like most farms, aside from seeing all the animals (of which there are over 500 of!) there is also an animal handling zone as well as indoor and outdoor play areas and a dino trail. 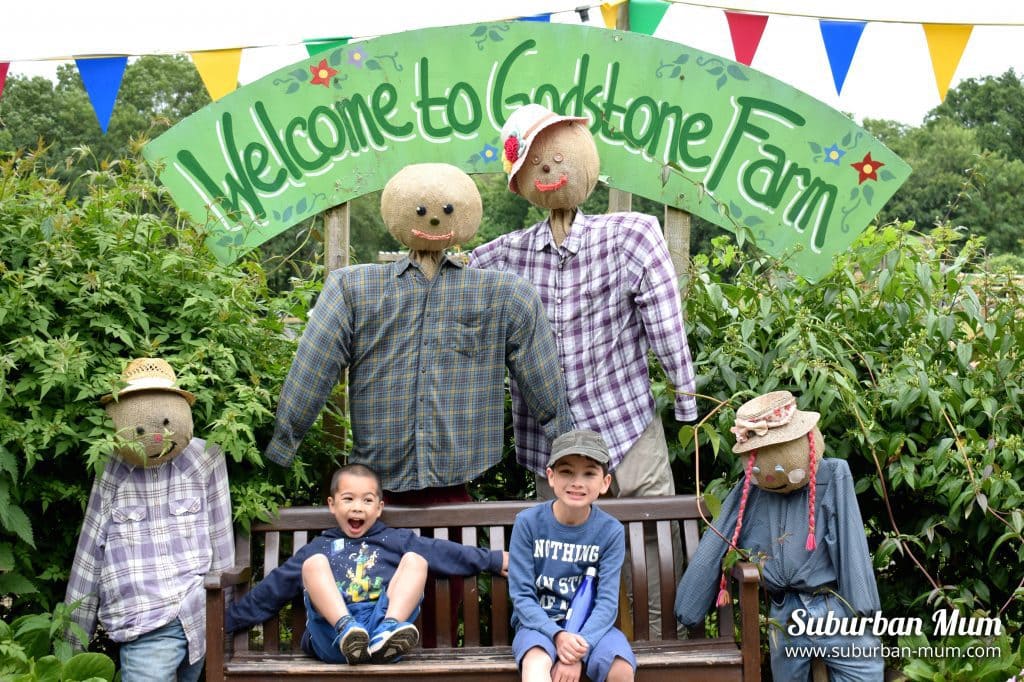 We started our day by visiting some of the animals. The boys were really taken with the horses and had fun checking out the creepy crawlies in the Creature Caves. The piglets were hilarious too. I think they were having a mad 5 minutes as they were running back and forth at speed much to the boys’ amusement. 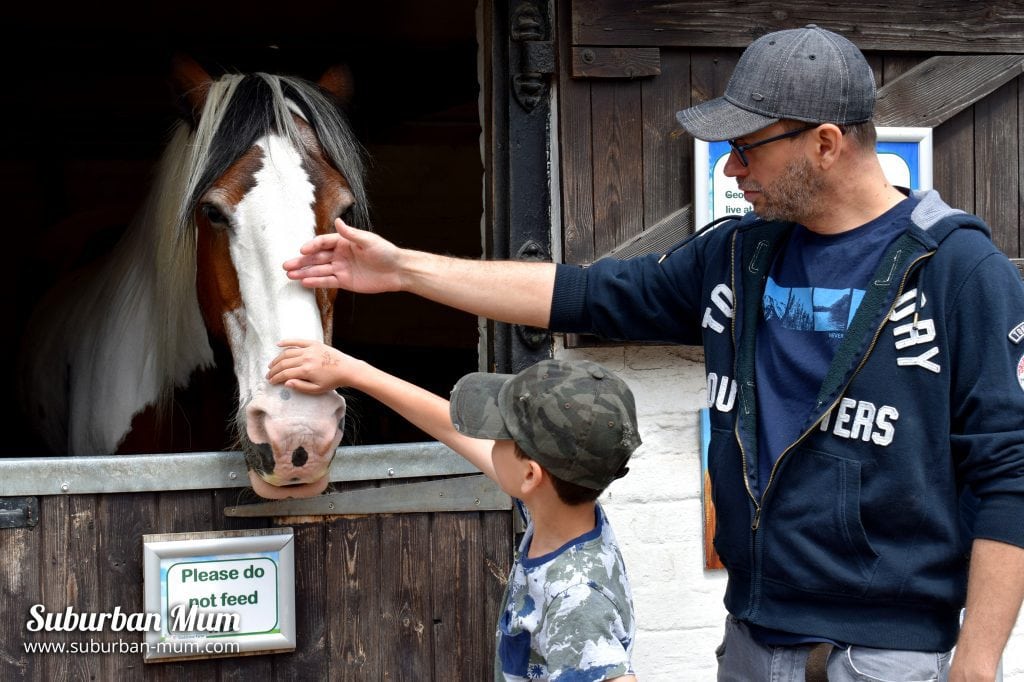 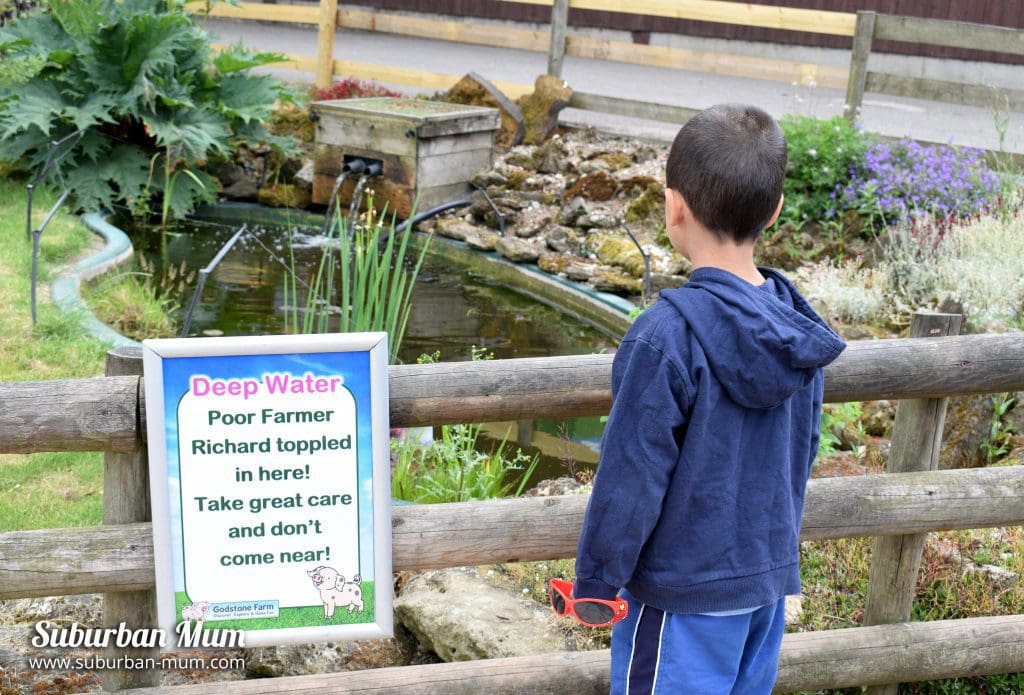 They then spotted the Indoor Playbarn so of course, they had to go in and burn some energy off whilst Mr H and I sat down and had a cuppa. The play barn is split into areas and has a baby section, a toddler area and then the main play area for children over the age of 4. Our two (aged 5 and 8) were happily playing hide and seek between themselves and whizzing down the big green slide. 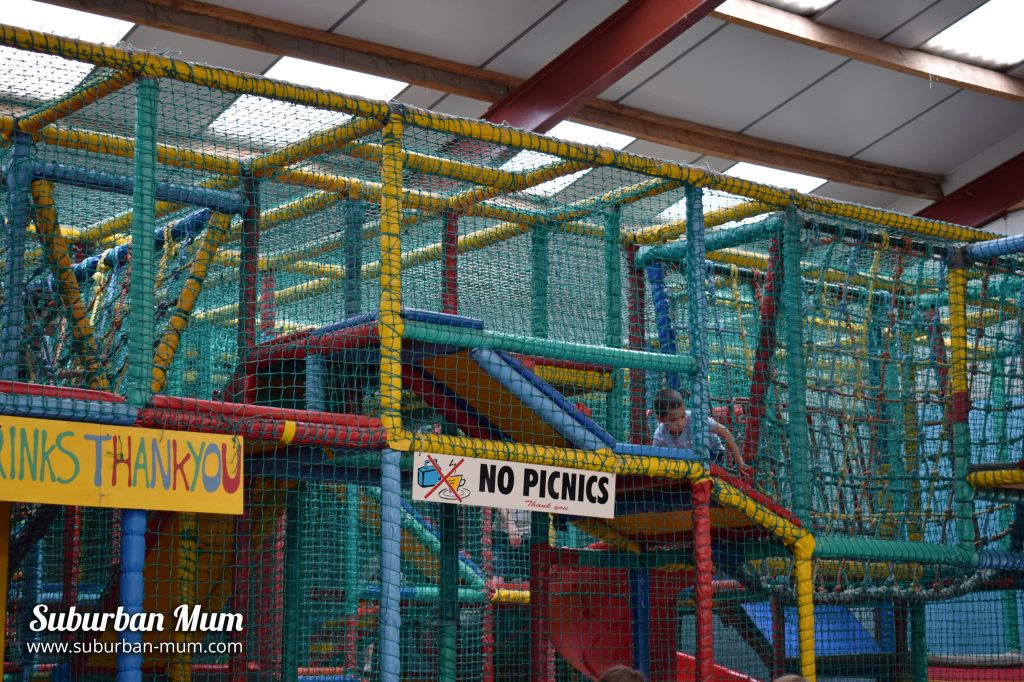 Next up, we decided to head onto the Dino Trail. E used to be a huge dinosaur fanatic when he was younger so we tested his knowledge to see if he could still remember the names of the dinos! 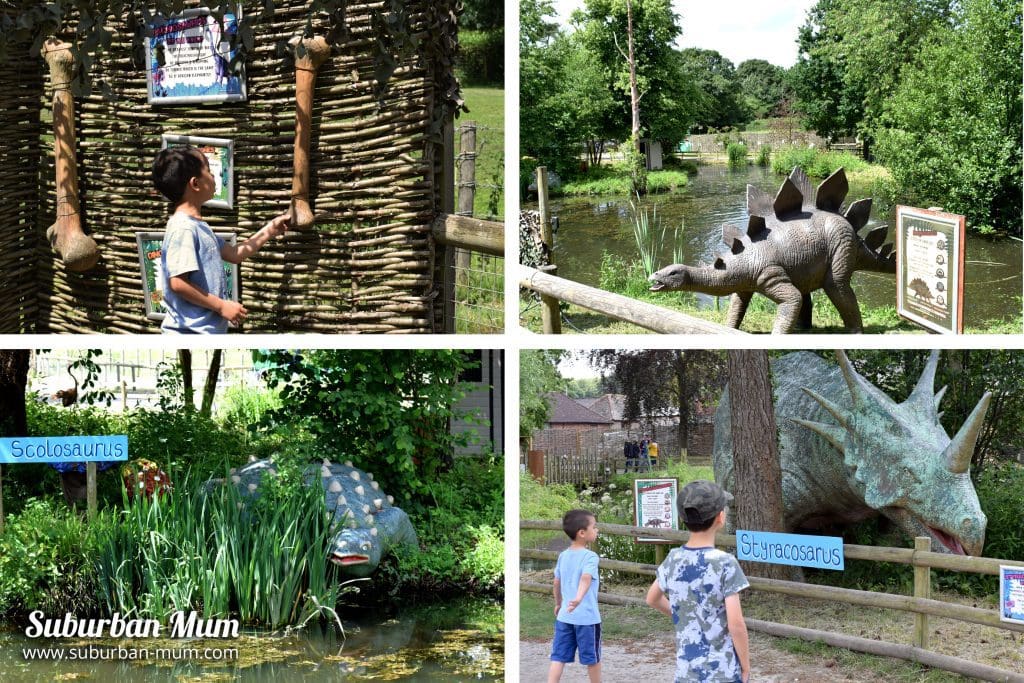 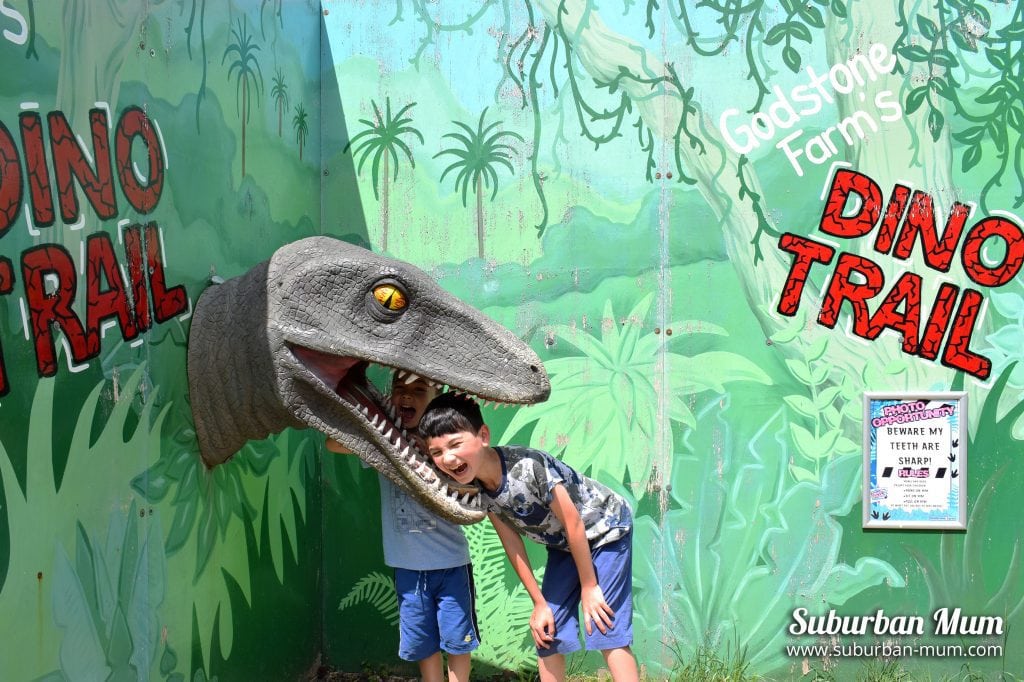 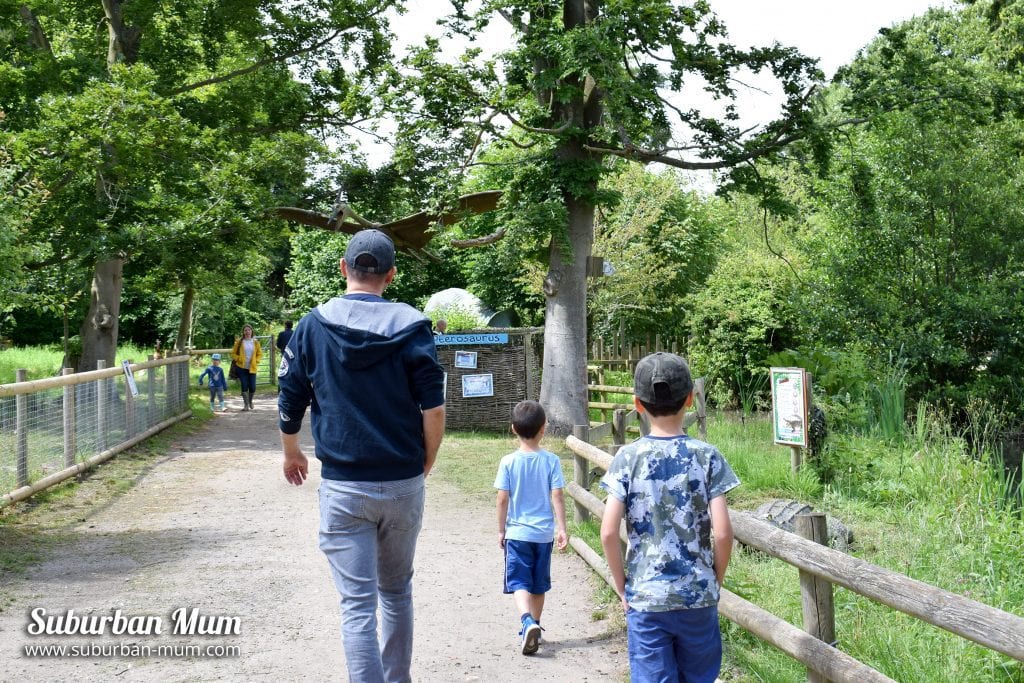 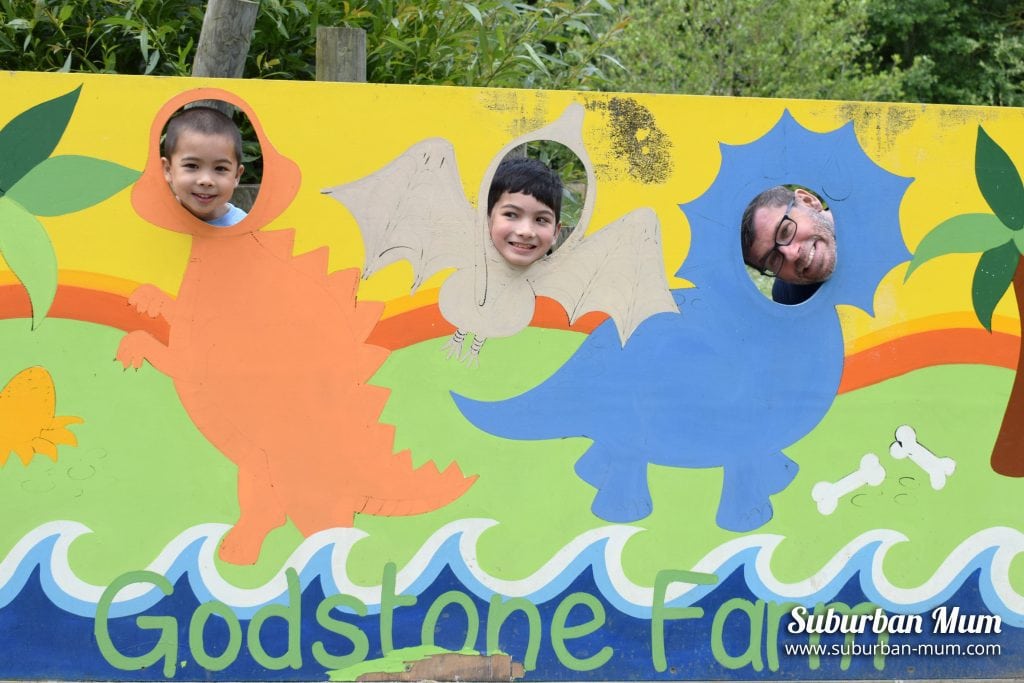 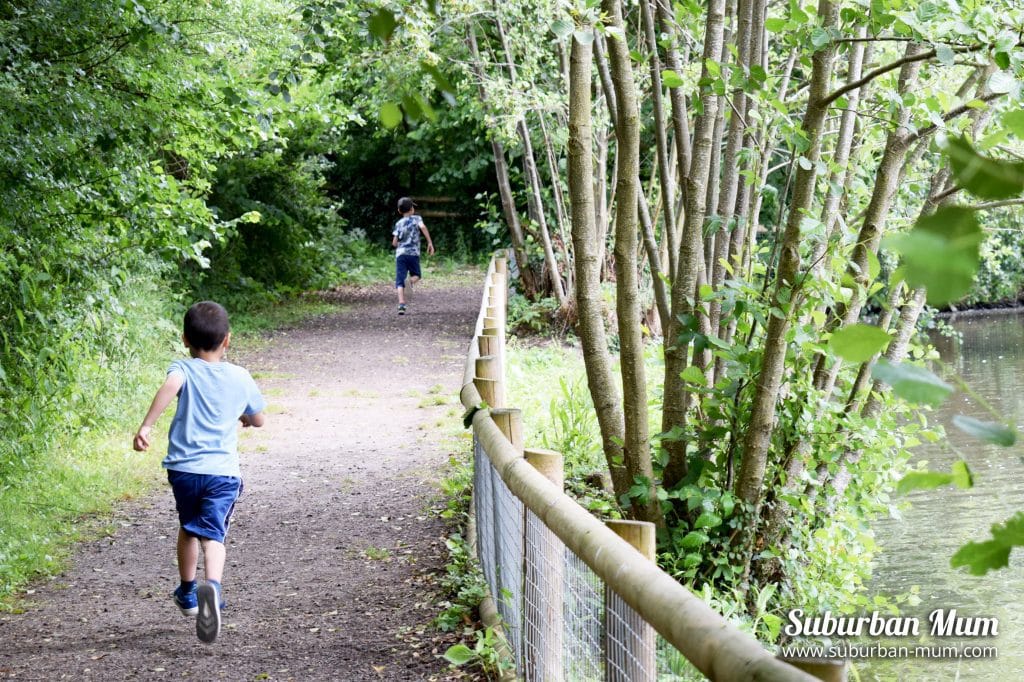 M loved the areas where you could pretend to be a palaeontologist and excavate dino bones. At the end of the trail, we came across a pond and lots of very noisy ducks who were wanting our attention. Before long, it was time for lunch. Godstone Farm has a dedicated picnic area should you wish to bring your own food for the day. There’s also a Tea Room where you can buy a variety hot and cold food from and we opted for the latter, having not been organised enough to pack a picnic!

Having refuelled, we hopped onto the tractor for a ride around the farm and spotted a Bug Hotel. The boys wanted a closer look at it so after the tractor took us back to the starting point, we took a walk back to see if we could see any bugs residing in the hotel.

From here, we stumbled across the huge outdoor space that the farm has to offer. The Adventure Playground had swings, slides, zip lines and the biggest sandpit we’d ever seen. The boys were so excited we couldn’t keep up with them as they wanted to go on everything. 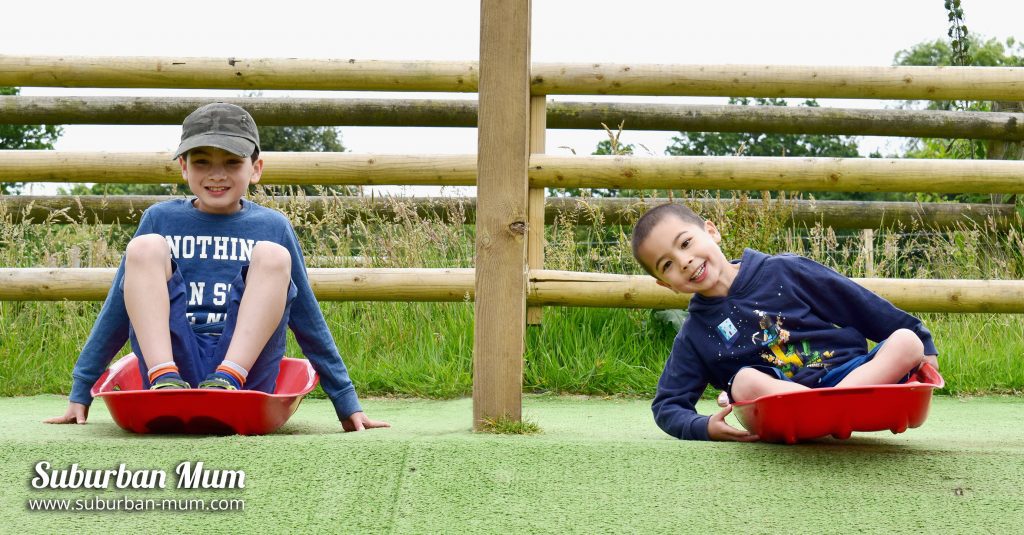 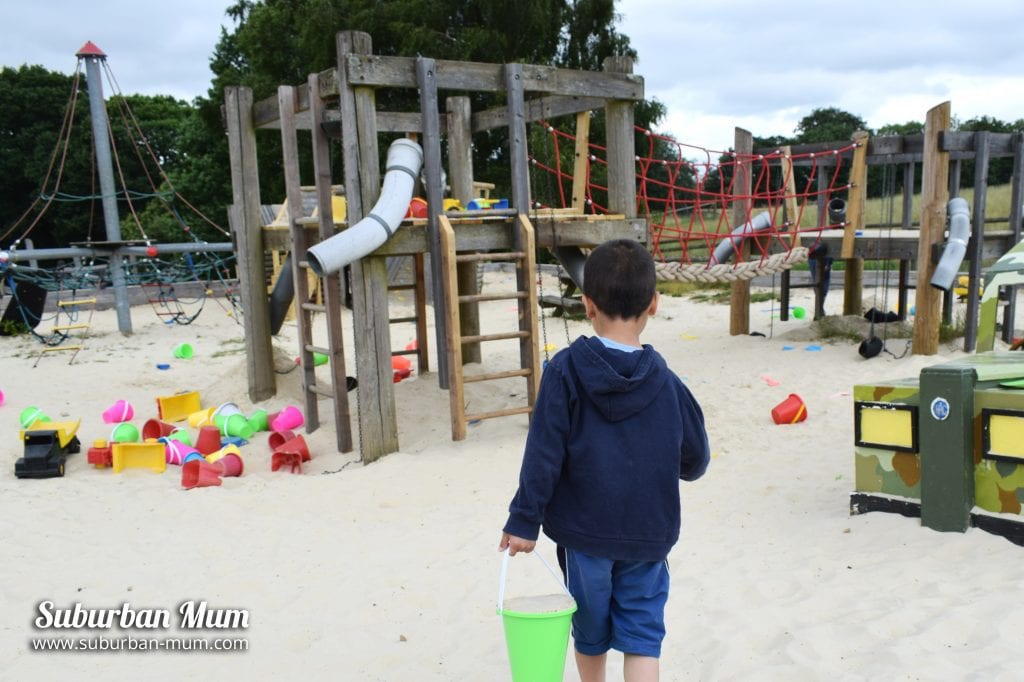 We ended up spending over an hour in the Adventure Playground area and ended up in the sandpit which kept the boys entertained for ages. There was an activity platform with chutes and pulleys and Mr H and I got roped into filling up as many buckets as we could so they could pour it down the chute to make a big sand mountain. 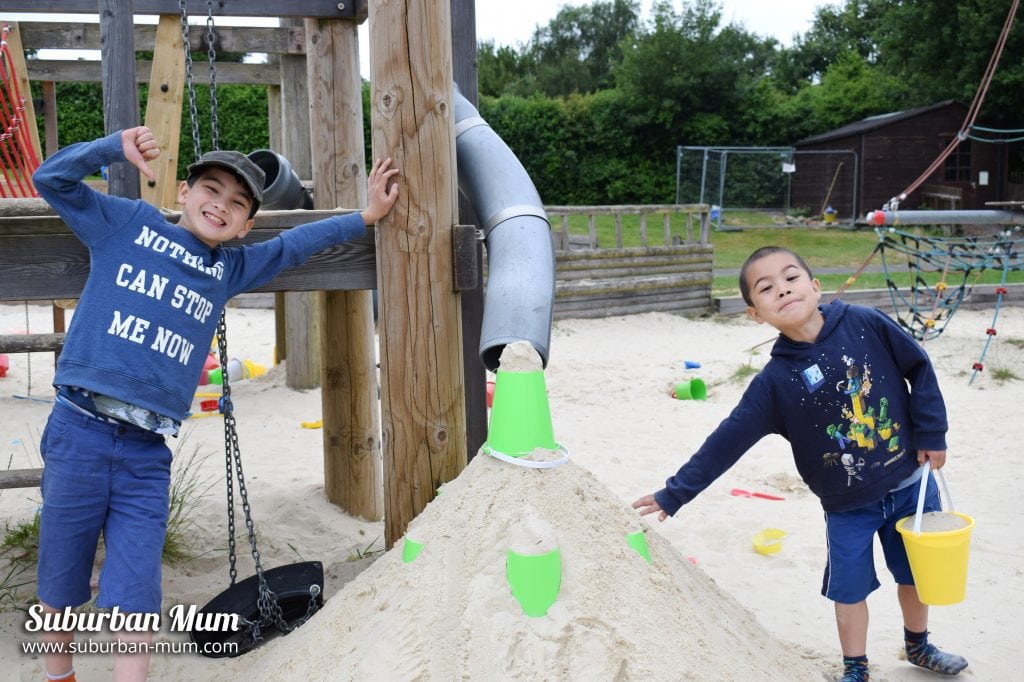 I have to say I was super impressed with this area. We’ve been to other farms with sandpits before where the boys have been disappointed as there were not enough buckets and spaces to go around. This certainly was not the case at Godstone – they had them by the bucketload so everyone was happy.

We ended the day by visiting the Animal Handling section where the boys had cuddles with bunnies. They were so cute and very soft – the boys totally fell in love and wanted to bring one home. Overall, we had a fantastic day at Godstone Farm. There is so much to see and do and even after spending the day there, we still didn’t get round to seeing everything.

We loved that there was a good mix of farm activities available and a huge variety of animals to see. It would make a great visit whatever the weather and they also hold special events throughout the year too.

If you’ve not been before I would recommend a visit – fun is guaranteed whatever the weather! 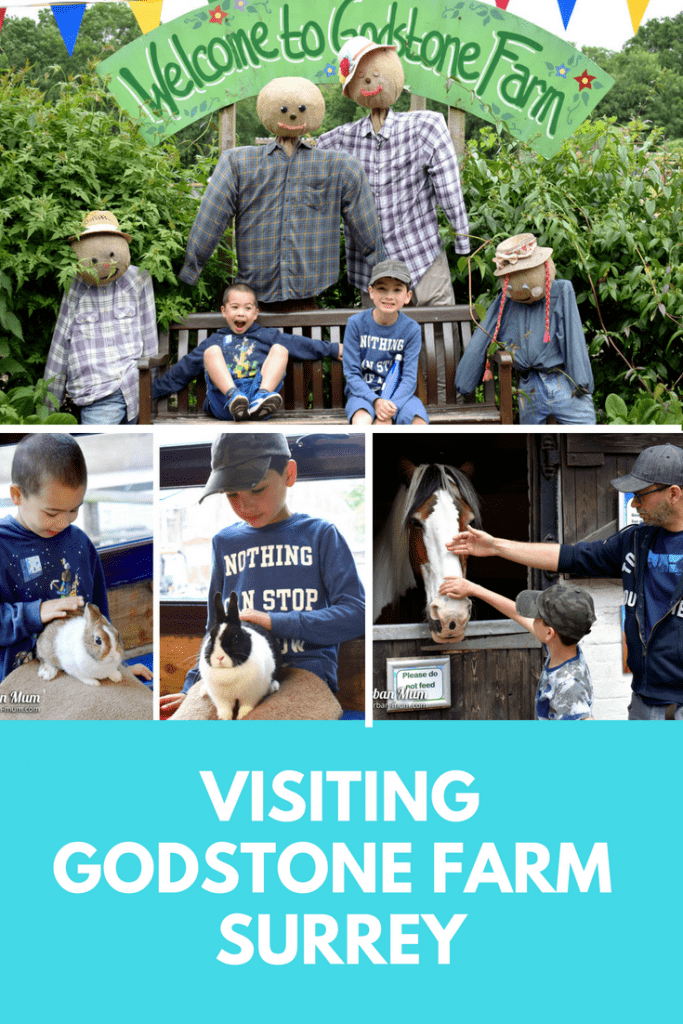 *We were invited to Godstone Farm for the purpose of this review.