I want to document our life during this lockdown period due to COVID-19 pandemic, somewhere to jot down thoughts, feelings and generally how our family is coping with life under lockdown…

After spending the first two weeks of lockdown homeschooling, week 3 was the first week of the Easter holidays. I had planned to do a little home educating but realised that I actually needed a break from it. The boys were happy being able to spend their time playing and watching tv and it meant that Mr H and I could focus on work.

We also set the boys a task to help get rid of a few of the bushes in our garden. It was a good excuse to get them active outside and to get some fresh air. 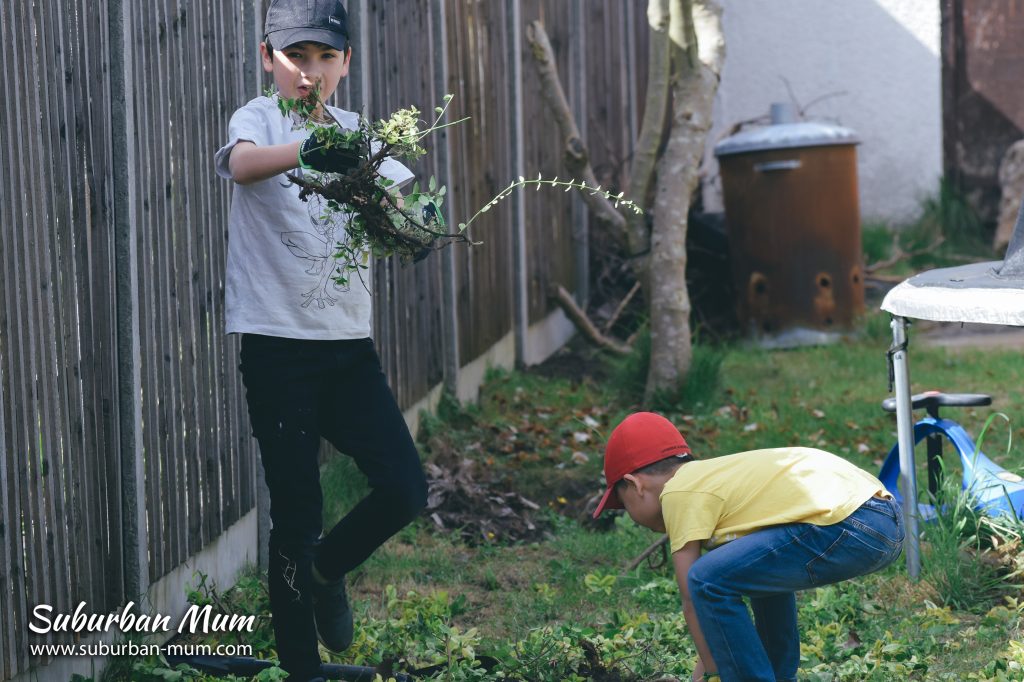 They both used Amazon vouchers that they got over Christmas to buy some new toys which arrived quickly. I am so glad that we saved them to use at a later date – they were both very excited to play with their new toys and have literally spent hours setting up army battles with soldiers and tanks.

The boys play well 95% of the time but having to spend 24/7 together I think is starting to wear a little thin. There’s been a bit more bickering and moaning over silly things and there have been periods where they have a mad half hour play fighting, clearly, they have a lot of pent up energy to try and expel!

I had to pop out to the pickup E’s prescription from the pharmacy on Thursday and it was the first time I had to observe the 2 metre queuing system outside the pharmacy as they were only letting in two people at a time. There were more cars driving around than I thought there would be and I also saw lots of people out on their walks.

As we’re both still working, we’ve not lost track of our days just yet. We’ve stopped listening to the radio and we have consciously decided to try and avoid the news as much as we can. We just want to try and keep things as normal as we can for the boys.

We still very much look forward to the weekend where we can have some downtime and not have to worry about juggling work and the boys. The Easter weekend brought us glorious sunshine which made having to stay at home just that little bit easier. We had our first barbecue and the Easter bunny still managed to visit and leave the boys some goodies.

Read my other Life under Lockdown posts: