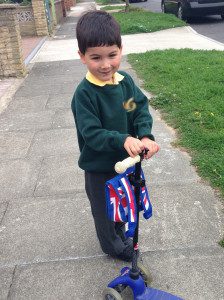 I asked if he had made any friends and apparently he played with children but didn’t know their names..I guess its still very early days…. I also noticed he had a sticker on his jumper which he told me he was given for “good listening” I nearly fell off my chair hearing this – a sticker for good listening from a boy who is not very good at listening at home?! Just goes to show how different they can be when they are not in their own environment!

I’ve been working from home this week as I was keen to be close by incase there were any wobbles or meltdowns about going to school but touch wood, so far so good.

It’s great that E seems to have settled in so well… I on the other hand feel like a complete newbie again in the school playground with all the other mums and dads. I’ve been quite keen to try and strike up conversations with parents of children who are in the same class as E but so far it’s proved a bit difficult. He was the only from his nursery going into this school so there have been no familiar faces and whilst we know other children in the school they are in Year 1 and Juniors.

I’m hoping its because everyone is still focused on making sure their children are ok/happy etc as so far we literally drop off and pick up with not much conversation or acknowledgement of each other (or maybe it’s just me?!) who knows, I guess only time will tell!