AD - This item has been gifted

There are less than four weeks to go until its officially the Summer holidays and that means parents need to be organised with sorting out thank you cards and gifts for teachers. Our classes tend to club together to put money towards vouchers. I don’t think you can ever go wrong with that, after all, there are only so many chocolates and wine they can go through right? I do like to have the boys help make a Thank You card if I can as it shows just how much we appreciate the work they do.

If you are looking to inspiration why not try the Thank You card below? 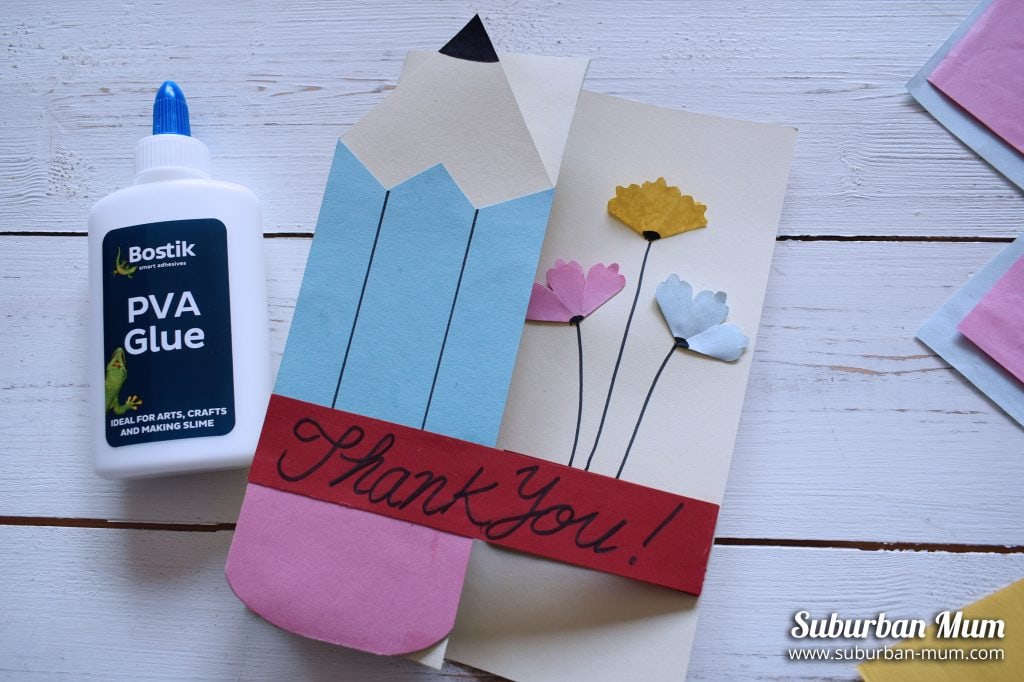 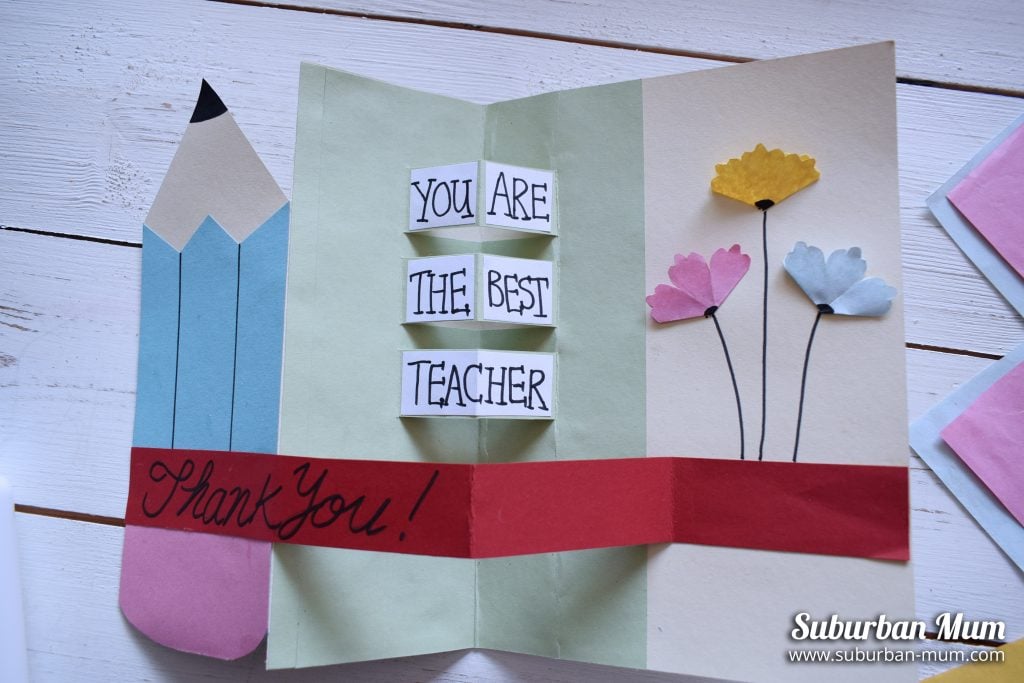 How to make a Thank You card for Teachers 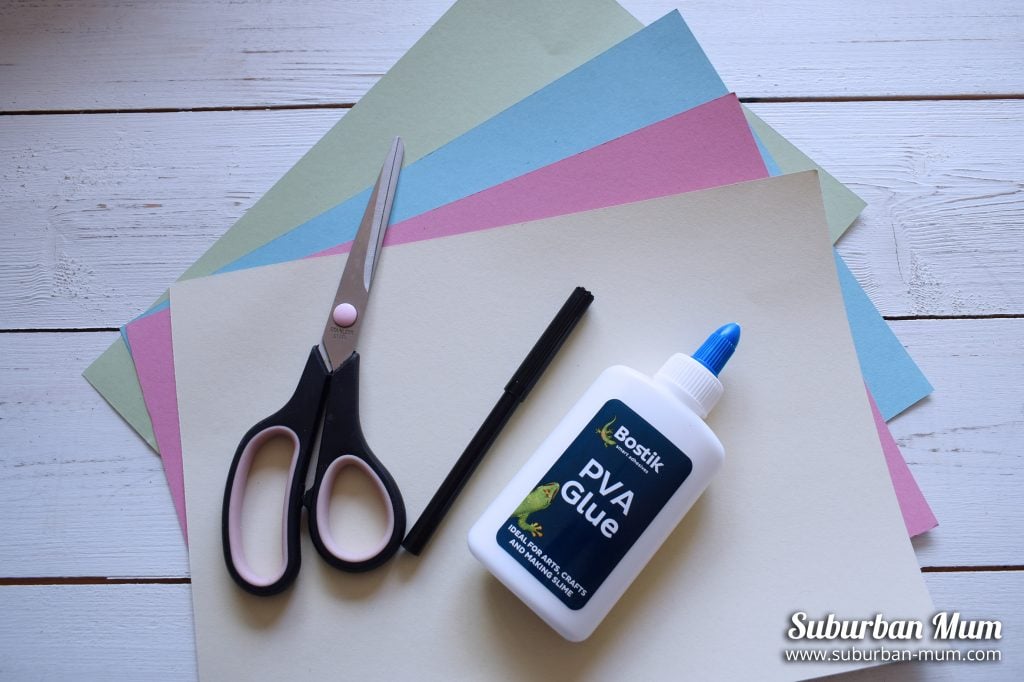 To create the Thank You card you will need the following:

1. Fold a piece of A4 card in half and then fold the card back like the photo shown below. 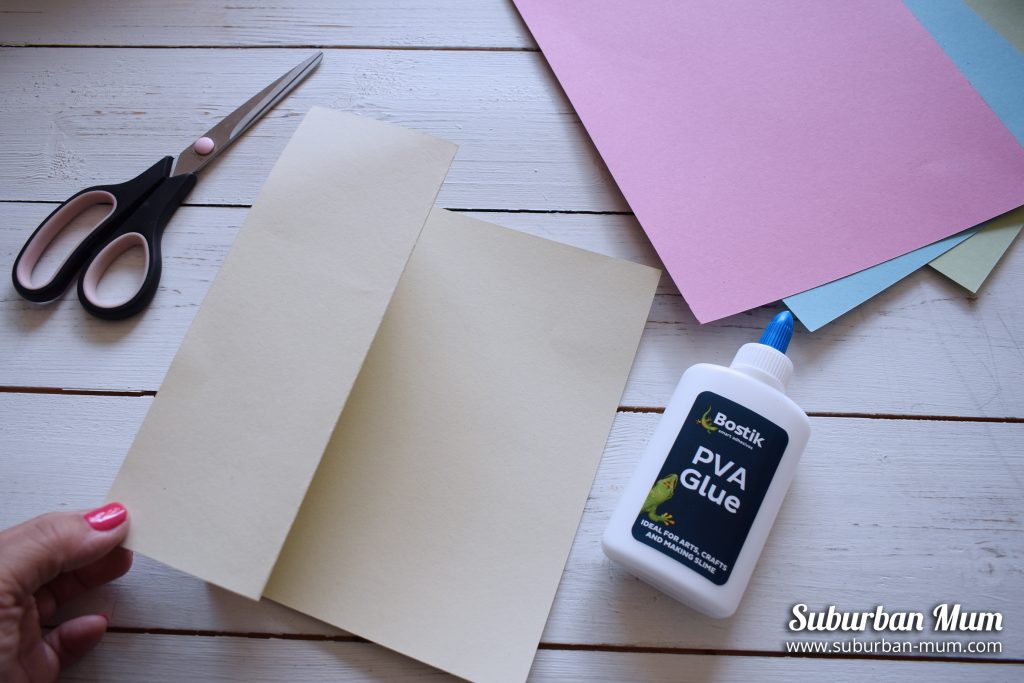 2. Next, cut a piece of coloured card the same width as the folded flap. This piece will be the pencil so you also need to cut triangles into the piece and glue down using the PVA glue (see below) 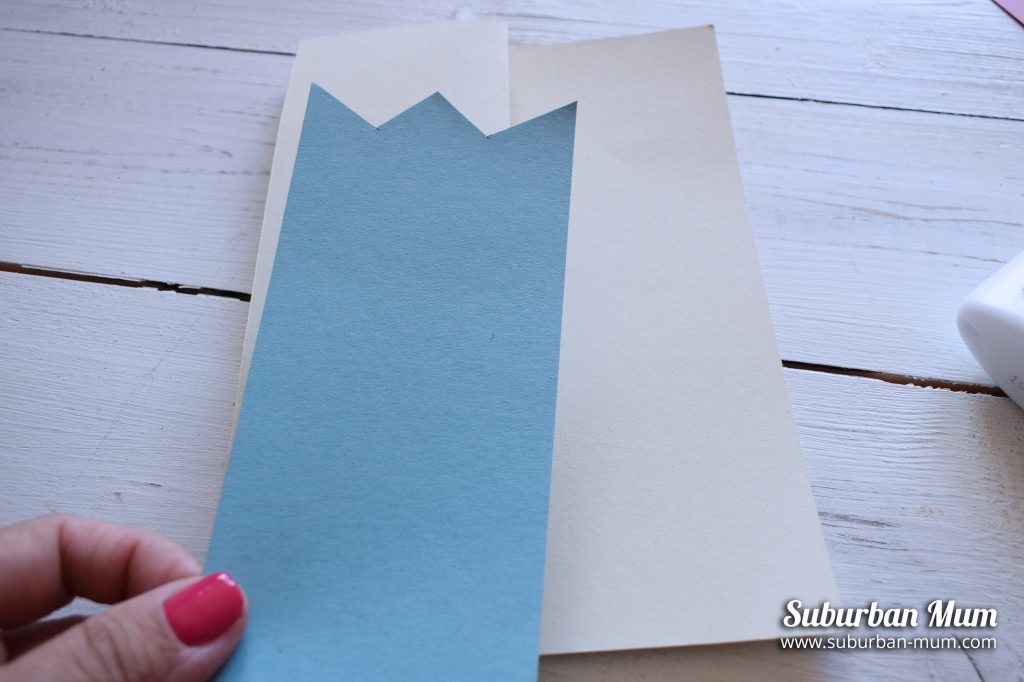 3. Draw the triangle for the pencil tip onto the white piece of card, cut out and then using a black marker pencil in the nib and draw in the lines for the pencil.

4. Take some pink card and draw out the shape for the eraser part of the pencil, glue on top of the pencil and then cut out the excess. (see below) 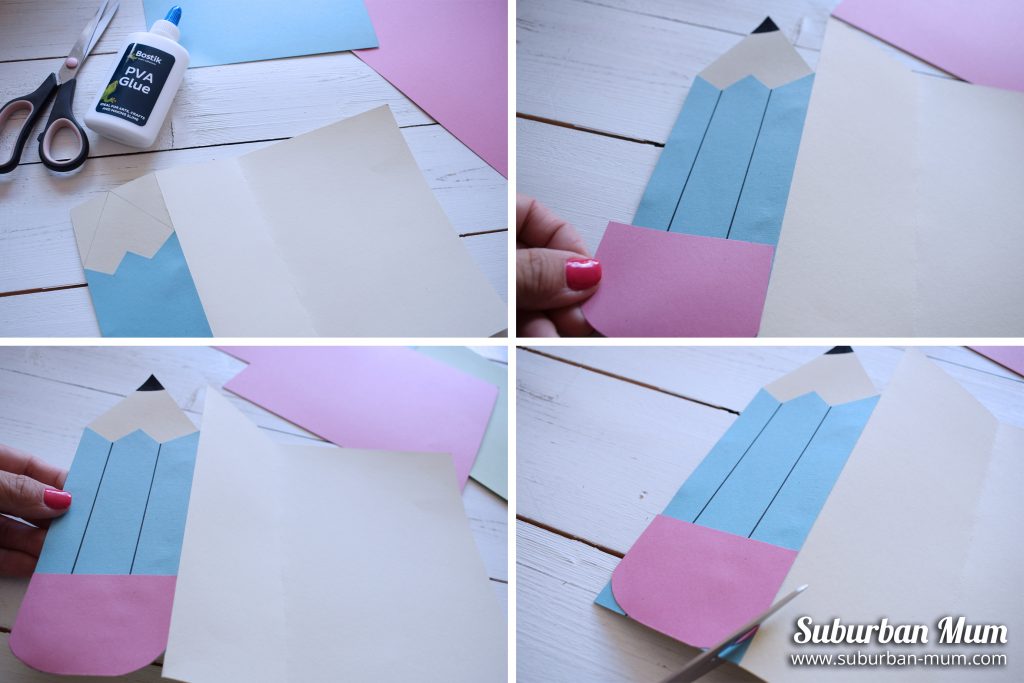 5. Cut out another piece of coloured card that is half the size of A4. This piece will be used for the pop-out message inside the card. Fold in half and crease slightly in half again.

6. Using a pencil, draw out three equal blocks, allowing for space in between. Cut into the lines with scissors and fold over the blocks (see photo below) 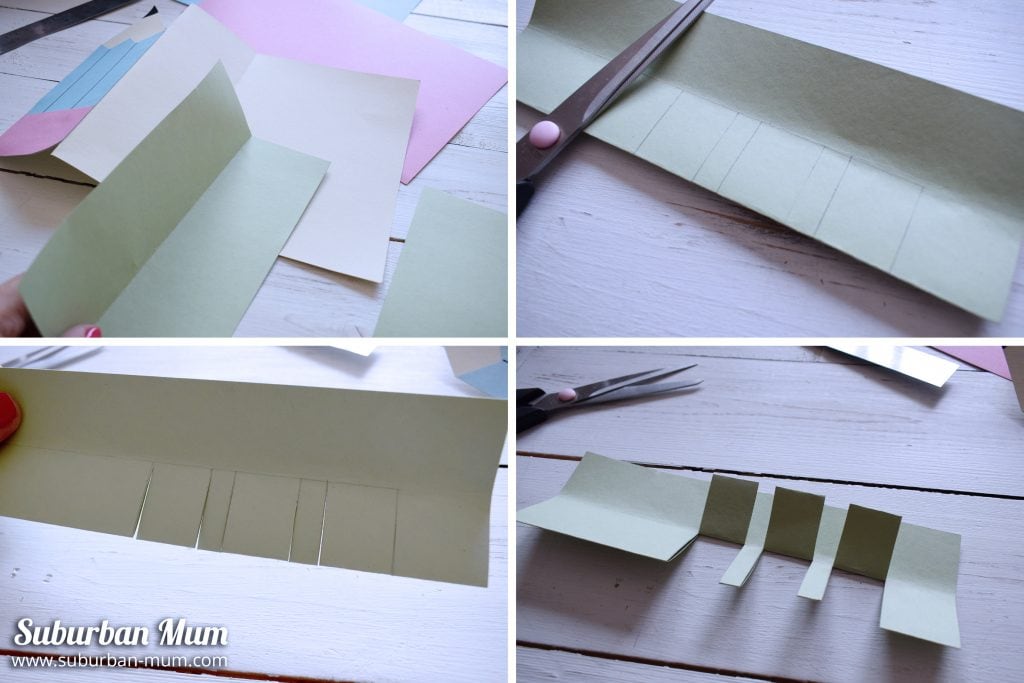 7. Turn over and pop on some PVA glue, line up with the inside crease of the card and stick down. Repeat on the other side. You should now have a card that has three blocks that pop out when you open the card. 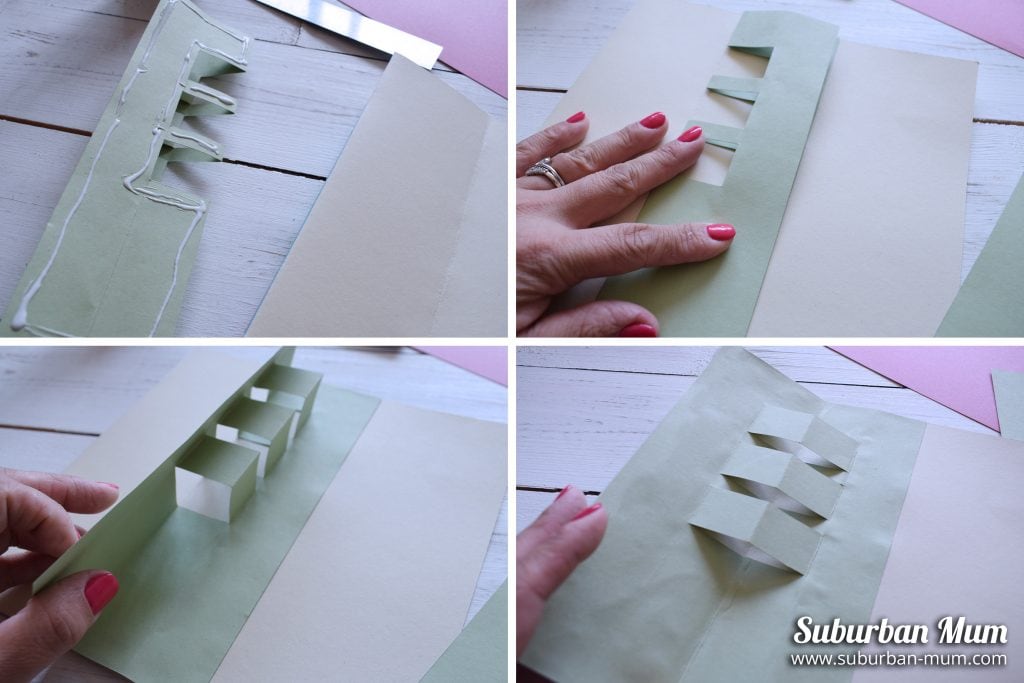 8. Cut out your message to stick onto the blocks. We went with “You are the Best Teacher” 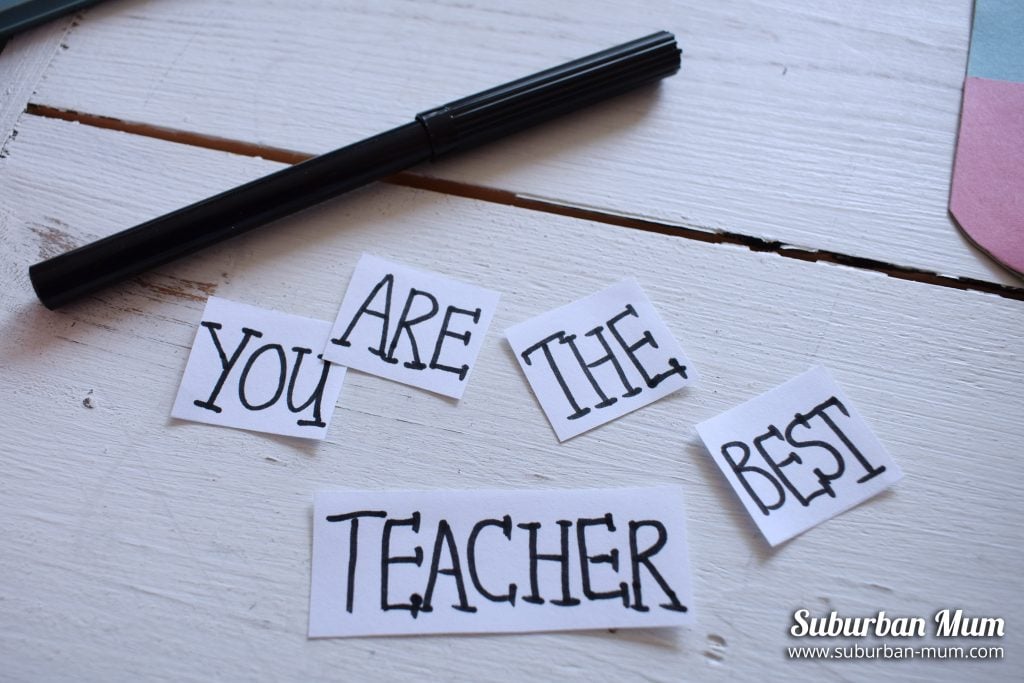 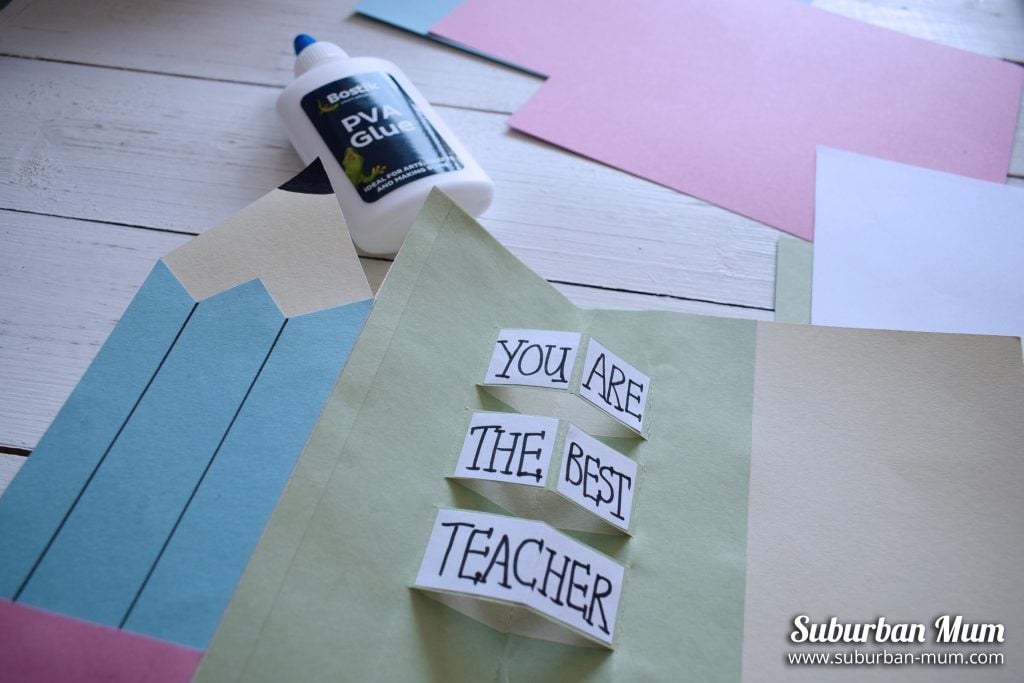 9. Now we will make the title for the front of the card. Take a strip of coloured card that fits the width of the whole card when opened out, fold it in half, then fold the strip back. 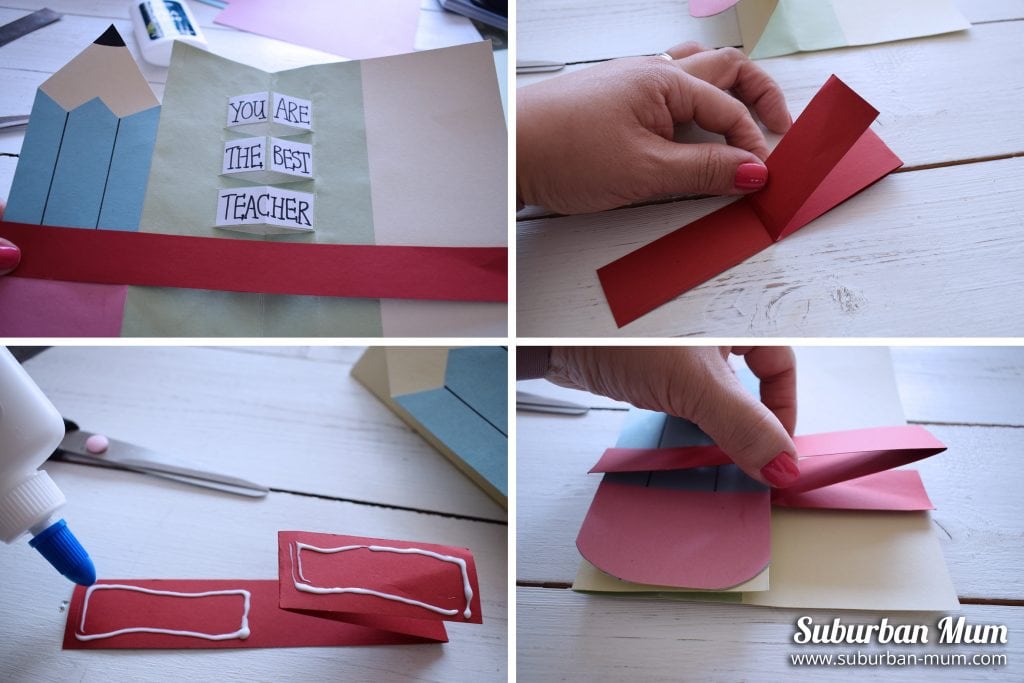 10. Turn over and apply PVA glue onto the back then position into place so that the longest part goes across the front of the card (across the pencil) and the smallest strip is positioned on the back of the card (see photo above) 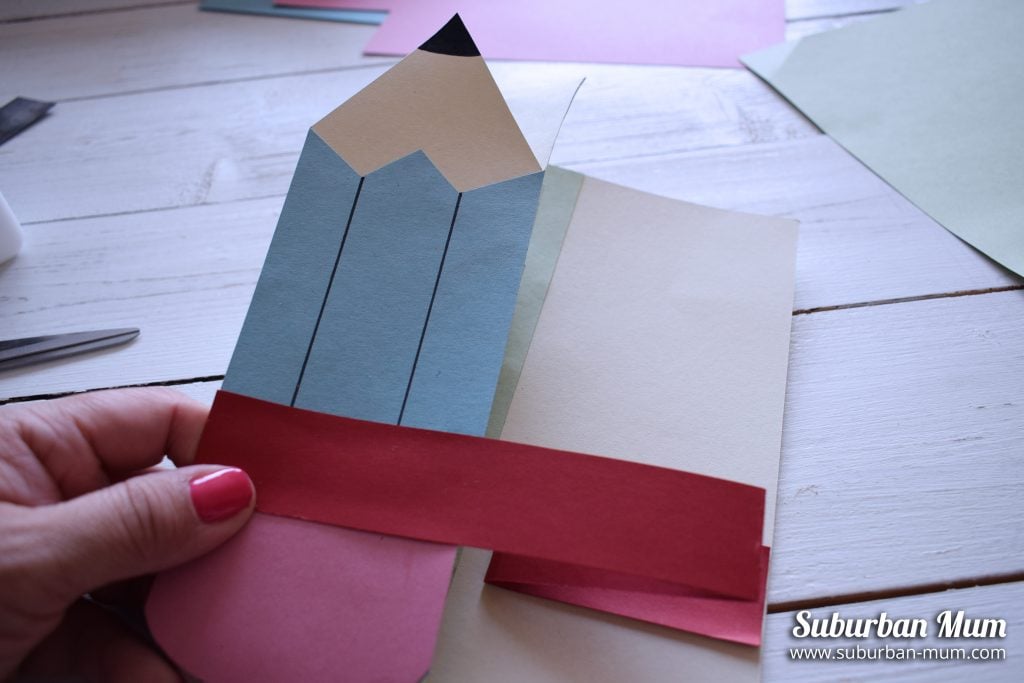 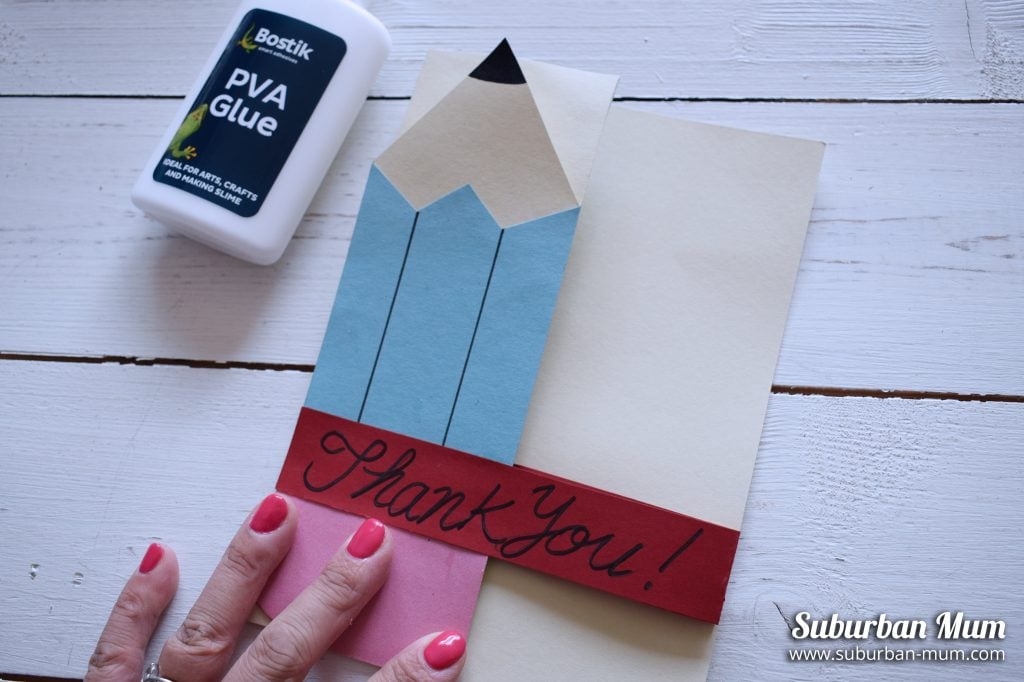 12. Now we will make the flowers. Fold some small square pieces of paper into 4 and draw in the shape below. Cut and open out and you will have a flower pattern. 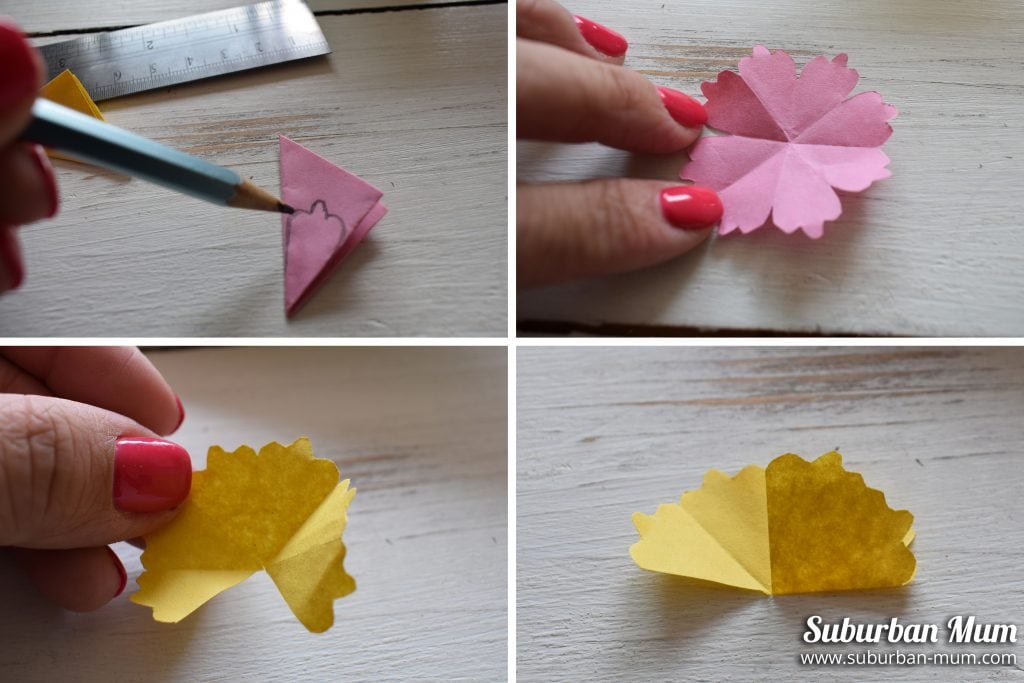 13. Cut one-quarter of the flower away and then fold in. Turn over and then position onto the card and glue. (see below) 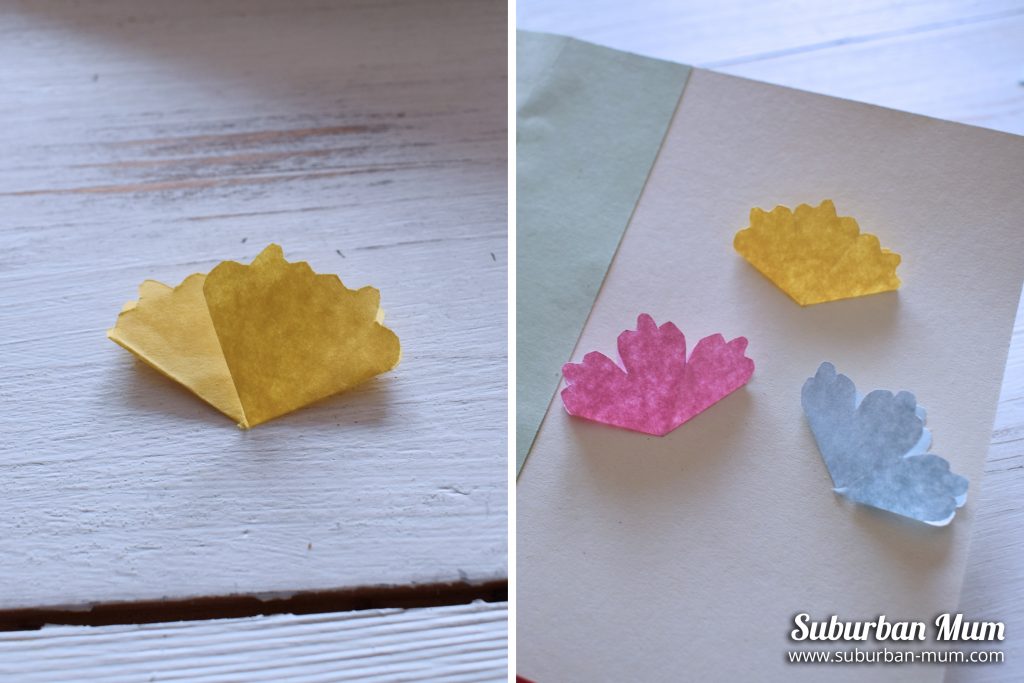 14. Finally, using a pen, draw in the flower stems. Your card is now finished! 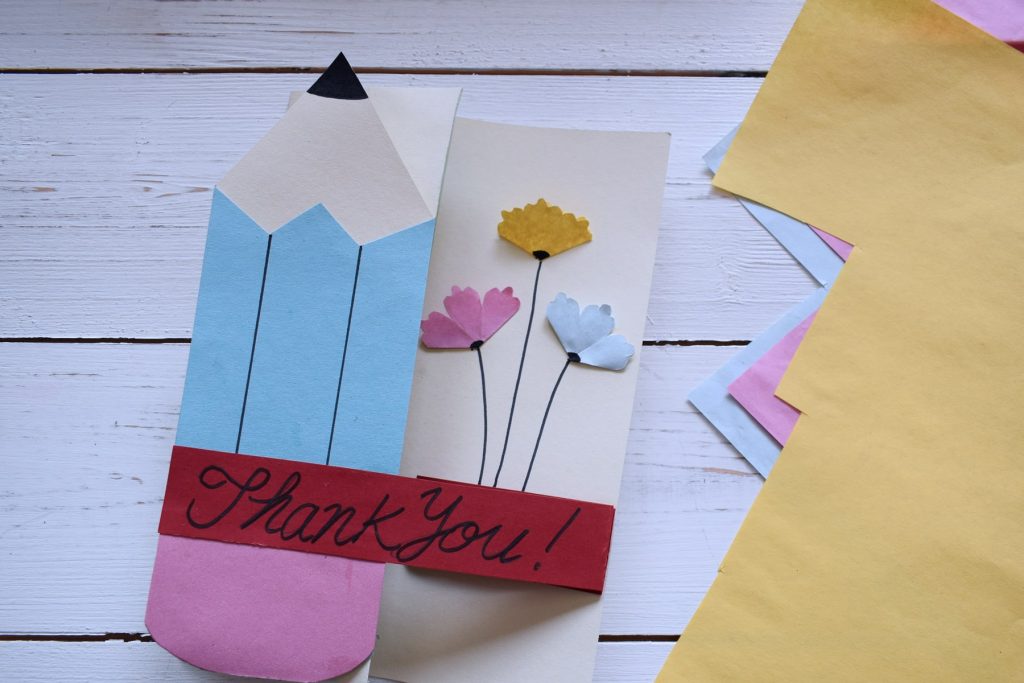 *I’m a Bostik Craft Blogger and we were sent a box of crafts from Bostik in order to create these items. 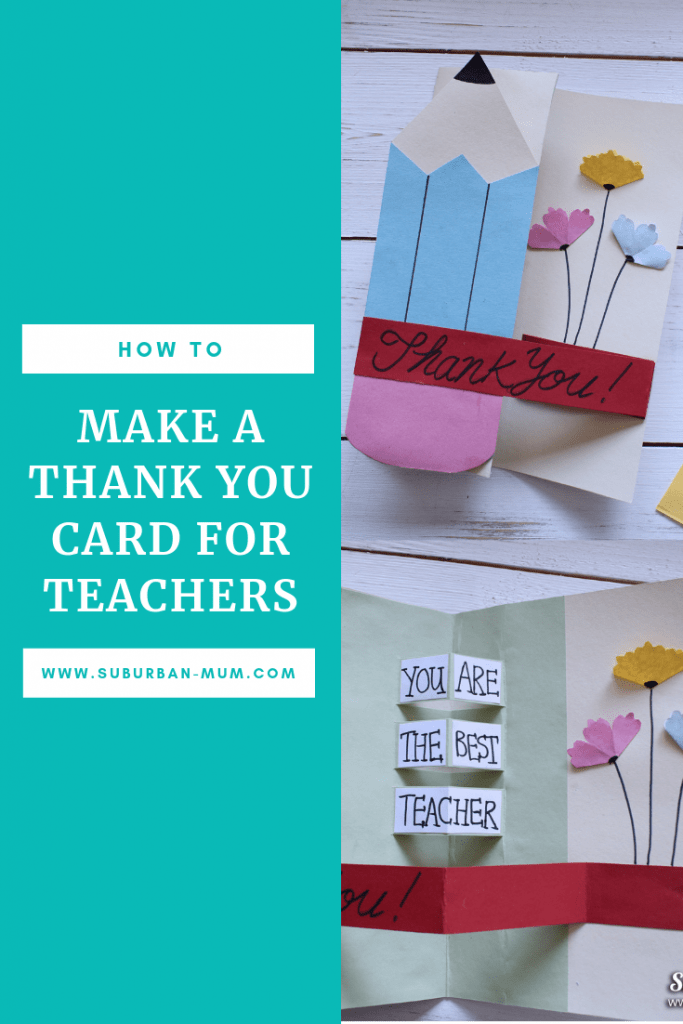